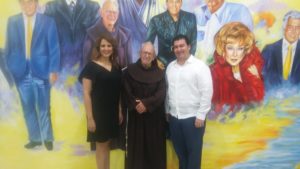 Brother Ivo Honored in a Mural

If you walk the streets of Guaymas with Brother Ivo, be prepared to stop a lot.  Everybody knows him and takes the time to chat.  In July, he received another of many honors during the annual Festival Mar Bermejo commemorating the 1854 Battle of Guaymas.  At the festival, he was recognized as a major contributor to the cultural development of the city.  The ceremony was held at the Civic Auditorium which bears his name.  His picture is in the building’s new mural along with other key people who were honored.  His youth philharmonic orchestra performed during the festival in quite an extravaganza that was funded by the city. You can experience them at:  https://www.youtube.com/watch?v=5MaFtoClXFg .  Don’t miss the younger children who appear later in the program! 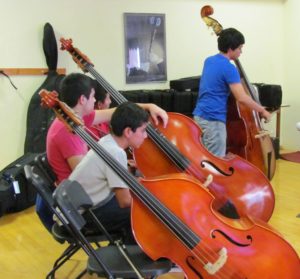 The almost 90 year old Franciscan came to the Casa Franciscan Mission over 30 years ago with the idea that music could bring joy and a path out of poverty.  In 1996, he formed a mariachi band and group of folklorico dancers providing employment for its members.  They even played for St. Pope John Paul II in Rome.  The Pope actually came on stage and sang with them!  Many of Guaymas’ mariachi bands have their roots in this original group.

But the story goes on, out of a burned out shell of a building, Br. Ivo built Bellas Artes (Beautiful Arts) which now houses a youth symphony orchestra with PhD level musical instructors, instrument repair shop, and more.  The tuition paid by some of its members provides scholarships for the margin 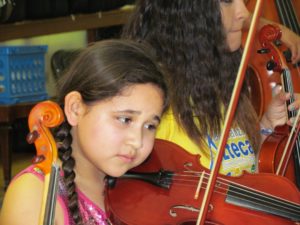 alized Mission children to attend.  No one is turned away.  A foundation called Soy Esperanza (I Am Hope) administers these scholarships.

Br. Ivo describes what happened next as a miracle. The government constructed a musical conservatory for him. The building overlooks the Sea of Cortez and the hope is that it will he

lp to bring needed economic growth to the area.  To paraphrase Alice Barrett  Music is the language and prayer of the soul.