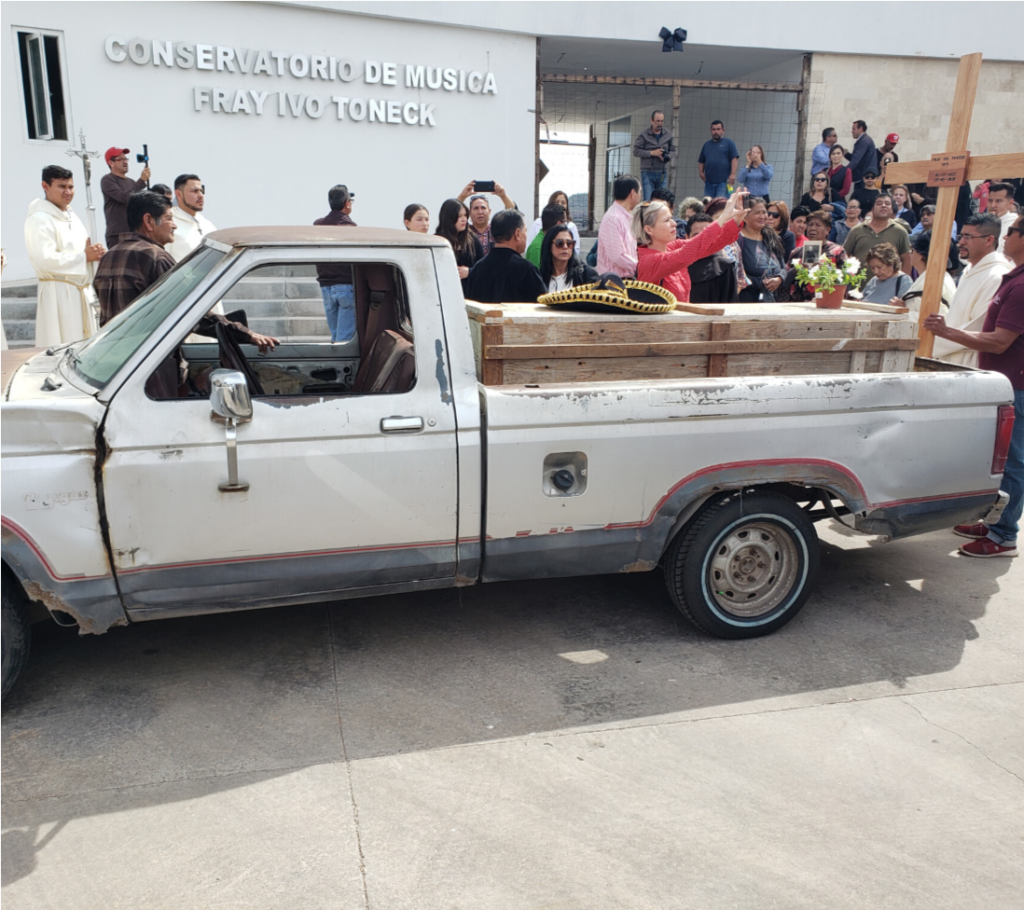 This Easter we celebrate Br. Ivo Toneck who left this earthFebruary 29, 2020, after 32 years at the Casa Franciscana Mission. I would like to relate some memories of this remarkable friar. Not long ago, Ivo made his usual arrival in his beat-up pickup truck which is shown in this picture for his final ride in his self made casket. He joined us in our living room.

Although Ivo was never into fancy clothes, the t-shirt he wore was particularly ragged. I commented that, even though we were not wealthy, we could afford a new t-shirt. He responded, “Tommy, I have been begging for the Music Conservatory, you want to look poor when you are talking to benefactors.” Hence, his title, The Master Beggar! It was like being with a celebrity. People would stop him and say, “¡Fray Ivo, me da tanto gusto verlo!” (“Br. Ivo, I am so happy to see you!”).

Ivo had not only worked with the kids of these folks in Mariachi groups and the local youth symphony, but now with their grandchildren! He touched hundreds of lives throughout the generations. At public events, while local politicians got a brief applause, Ivo always got a standing ovation. When his long-time doctor arrived at Casa Franciscana for the death certificate, he cried. The following day, the front pages of the local newspapers had color photos of Ivo.

How did this construction worker from Los Angeles have such an impact?! Jesus said, “Whoever remains in me and I in him will bear much fruit” (John 15:5). Ivo´s fruit is abundant! Whether building self-help housing in California, forming mariachi groups in Mexico, facilitating specialized treatment for children at Shriners International, building the Guaymas Youth Symphony (the foundation’s name – Soy Esperanza) and the Music Conservatory or giving pesos to someone living on the street, Ivo was a man of action and service. Through God, Ivo was the composer of his life but you, with your generosity, were the instruments that made it possible. Ivo never forgot that and loved you for it.