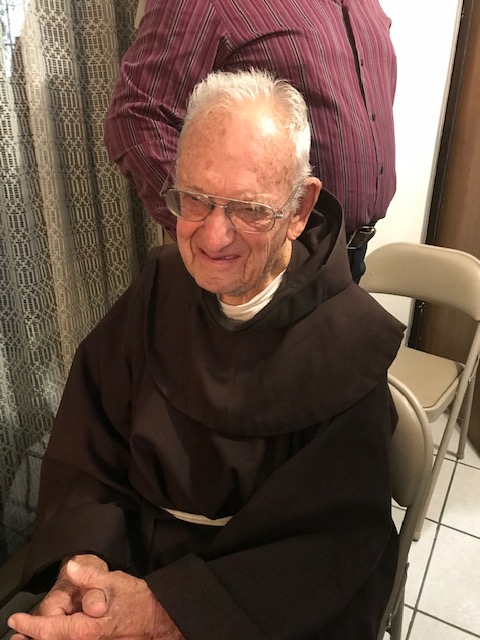 Brother Ivo left this world February 29, 2020 at the age of 97.  He was an example for all of us to believe in our God, to believe in the goodness of people and to persevere.  He came to the Casa Franciscan Mission approximately 40 years ago with the idea that Music is the language of the soul (Alice Barrett) bringing joy and a way out of poverty.  In 1996, with donations from the CFO (you), he formed a mariachi band and group of folklorico dancers which provided employment for its members and entertainment for the fiestas in Guaymas.  The group captured the attention of St. Pope John Paul II.  They played for him in Rome and the Pope came on stage and sang with them!

Next, Br. Ivo converted a burned out structure into Bellas Artes (Beautiful Arts) which houses a youth symphony orchestra) with PhD level musical instructors, instrument repair shop, and more.  Now self- supporting, the tuition paid by some of its members provides scholarships for the marginalized Mission children to attend.  No one is turned away.   On 06/23/2015, the Mexican government awarded Br. Ivo the Mérito de Cultura and the municipal auditorium was named after him.  A street in Guaymas also carries his name.

Many of us remember Ivo in a different way.  Despite his age and declining health, he traveled the almost 500 miles from Guaymas to Phoenix in an old van full of children bringing them for specialized care through Shriners International.   He brought hope and God’s love.  We laugh through the tears at the vision of him in his ragged tee shirt, never wavering from his vow of poverty.  If you gave him a new shirt, he would give it away.  Now we have a new vision of dear Ivo sitting with his beloved St. Francis and perhaps sharing a bowl of ice cream, his favorite treat. Rest in peace, Faithful Servant.

Donations may be made in his honor. **All donations will be transferred to the Mission in Guaymas to benefit the Conservatory. Unfortunately, there is no way for Casa Franciscana Outreach to represent that transaction as tax deductible.